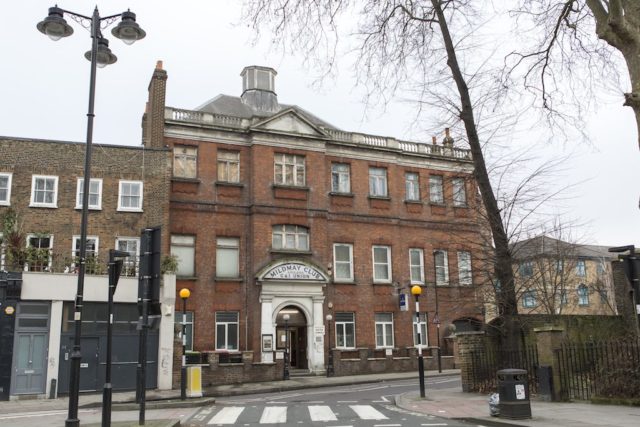 Newington Green is home to one of the last of London’s Working Men’s clubs, the Mildmay.

I frequently walk past the Mildmay Club building and always wondered what it is like inside. When I finally had the chance to enter, meet some committee members and take some photographs, I realised I had been given a rare opportunity. This was, after all, an exclusive, 129-year-old club where membership is not easy.

The entrance wall carries black-and-white photographs of chairman Fred C Riches’s family – including his mother’s 100th birthday – with some that date back to the 1900s. Then there is a small board listing the names of the club’s committee members and a much larger board, listing the club’s First World War dead – nearly 400 of them.
A glass-panelled display just before the main hall contains a picture of dancing women as they are watched by men propping up the bar, giving a rare insight into what this venue must have looked like in the 1930s when there was a theatre here. 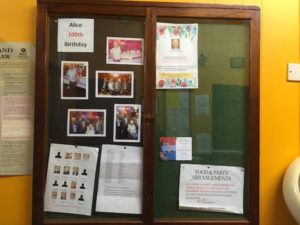 The main hall, however, takes you two decades further – to the 1950s. Its retro wallpaper, shiny disco curtain and traditional decoration has been preserved in this state for nearly half a century.
Ron Jeffreys, the Mildmay Club House committee secretary, said many films, serials and stand-up comics liked to film here because of this preserved decorative style.

The Victorian building, with its three halls and a nine-table snooker hall, has been used for film shoots, such as Ken Loach’s Vera Drake, and a series of Stewart Lee’s Comedy Vehicle were shot there too.
Jeffreys, who has been a member here for more than 20 years, said a property development company wanted to knock the building down and build luxury flats.

They offered £3.5 million, he said, but members turned it down.
“The club members wanted to preserve Mildmay Club as it is and let it continue as a club,” he said.
Today there are around 500 members of the club and they become shareholders of the club and the land upon which it stands five years are joining.
“We have no plans to sell,” he said. “We want to carry on like this.”
Mildmay Radical Club, as it was then known, opened in 1888 at 36 Newington Green Road and moved to a newly built clubhouse at 34 Newington Green near the Unitarian chapel in 1894, after the vicar of St. Matthias criticised its “pernicious influence among the young”. Rifle ranges were added to the facilities in 1907 and 1921. In 1930 it changed its name to the Mildmay Club and Institute, a name change that saw the club abandon its radical politics and enter a non-political era. By the 1950s, it was staging weekly variety shows.

Only a handful of such clubs still exist in London – including the Mildmay Club in Newington Green. It was once so busy – boasting 3000 members, by one account – that on some days it was not even possible to enter through the front door.
No women at the bar in the 60s
Jeffreys told us that some club rules were very strict in the 1960s.
“Ladies would not allowed to going to the bar downstairs. Only men could enter. There used be room on the side called the Ladies Room where ladies would go, and their husband would bring them up the drink in to that room. Their children would go there too.”
When the main hall was used a theatre, women were permitted to come and watch the shows on stage. The war years saw many star names take the stage, while the 1970s and 1980s heralded a modern era, when the theatre made way for a dance piste and stage.
The chairman Fred C Riches is a member because of his parents, ad has been so for 70 years. His parents grace some of the photographs on the wall. 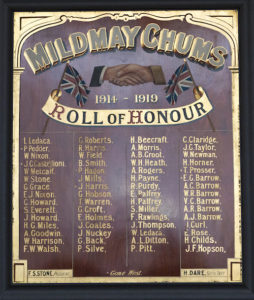 “This is owned by members,” Riches said. “It’s not owned by anybody else. People here own the club. We are all shareholders, all 330 members. But we get a lot more people in. Everybody nominates someone, so we keep it without any trouble. This is a family club.”
There was live music on the Saturday night I visited the club. Committee member Christopher Lucas said: “Saturday night is traditionally family entertaintment night. Mildmay has been a Working Men’s club for many years. A lot of working men’s clubs have closed. They faded because of the changes in people’s habits and customs.
“This club is going to go on because we have got new members getting in with new ideas as well. This what we are looking for. We want to preserve Mildmay as a Working Men’s club.” 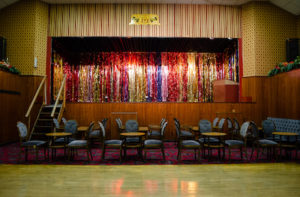