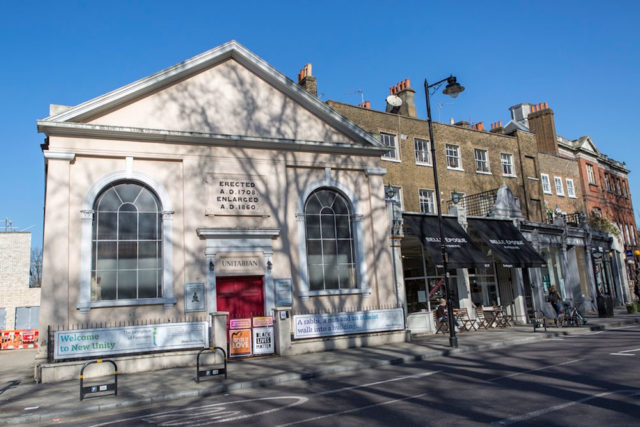 ‘Believe in Good’, says the sign outside the church. Hang on, isn’t that an extra ‘o’ in there? It isn’t, oddly enough. The New Unity, on the north side of Newington Green, is not like other churches: they don’t believe in God, heaven and hell, saints’n’sinners, or any of the other theological trappings we associate with traditional religions.
You may have seen it from the 73 bus dozens of times without realising what an extraordinary institution it is.
“One of our problems is that from the outside, you can’t see what happens on the inside,” says the minister, Rev. Andrew Pakula (everyone calls him Andy). “We had one guy who thought the people here would be really dour, all wearing black, with black hats – like a cross between the Quakers and a funeral.”

In fact the congregation are a diverse mix of friendly, thoughtful locals, attracted by the church’s focus on hope, social activism, compassion and “radical inclusivity”: literally anyone is welcome.
“Our primary principle is that every person matters,” says Andy. “That drives a strong impetus towards developing relationships – one of the most important things we do in life. Even, perhaps, with people we don’t know, who might seem strange or hostile – people who might have fewer privileges. We want to bring back the idea of love in the public domain.” 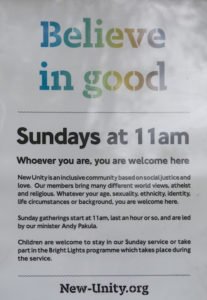 Coming from anyone else, that might sound airy-fairy, but the New Unitarians are firmly committed to positive action. Back in 2008, when the Civil Partnership Act still forbade same-sex couples from tying the knot in a religious setting, the New Unity decided to stop hosting heterosexual marriage ceremonies in protest.
“We just thought, that’s discriminatory,” Andy says. “They [the government] were saying, yeah, it’s OK for you people to get together, but not in a place where God’s watching.” The church teamed up with the Liberal Jews and the Quakers to oppose the ban, which was lifted in 2011.
Today, they work harder than ever to make our society a better, fairer place. The church’s Social Responsibility Team works closely with Hackney Citizens, an offshoot of the community organising group Citizens UK, on projects such as resettling Syrian migrants, ousting rogue landlords and campaigning for a “living wage” (as opposed to the existing minimum wage). Members of the congregation volunteer to do pastoral care or help out with the Sunday gatherings, which manage to combine singing and celebrating with the serious business of crafting strategies to deal with the fallout from Trump and Brexit. People without time to spare can share in the good works by making a contribution to the weekly collection, which goes to a number of different charities, benefiting those most in need: the homeless, impoverished elderly people, displaced children, and many others. 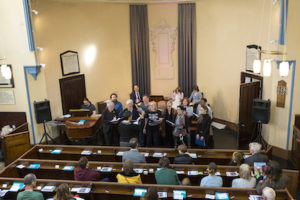 One parishioner, Daniel Wilsher, has been singing in the church choir for two years. “There is a real sense of mystery and energy about being part of a community of value where ‘the faith’ is not written down in a book,” he says. “Instead it emerges from and is lived by its diverse membership. It’s a journey with an unknown destination, but it’s also about the pure enjoyment of singing together, sharing joys and sorrows and finding comfort when it’s needed.”
And let’s not forget the next generation. Many Stokey families take advantage of the church’s excellent children’s programme, which mixes games and crafts with lively introductions to issues such as racism and prejudice. Next January, Andy plans to start a “coming-of-age programme2 for young people aged 12 to 14, “helping kids to explore their own values, perspectives, beliefs or lack thereof – a sort of Unitarian version of the bar mitzvah.”

Watching over it all is the ghost of former parishioner Mary Wollstonecraft, the pioneering feminist, immortalised by ex-local street artist Stewy in a striking life-size stencil on the church’s west wall. It’s still possible to sit in her old pew, #19; the wooden benches are unchanged since the 18th century. If you concentrate, you might just sense a trace of her bold, heretical, dissenting spirit lingering in the New Unity air.