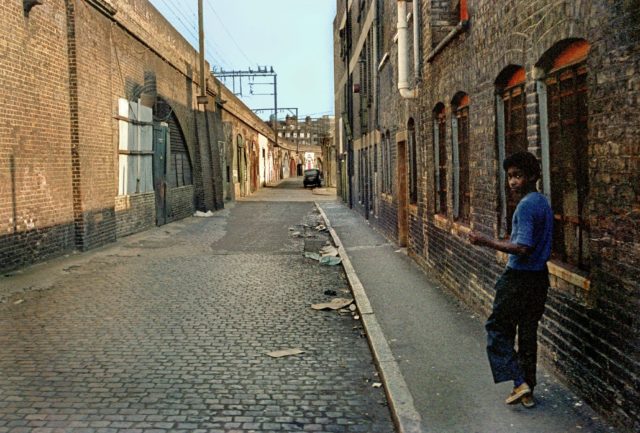 When Alan Denney moved to Hackney in the mid-1970s, he started taking photographs of Stoke Newington, Dalston and Stamford Hill. He unintentionally became an internet sensation when he put them online in 2008, attracting millions of views. His pictures document the change in Stoke Newington Church Street and the Dalston Kingsland Road.

Tell us about yourself.

I was born in 1952 and was brought up by my Italian mother in Gillingham, Kent. In the 1950s and 60s Gillingham was a town of soldiers, sailors, dockyard mateys and working class Tories. Like a lot of young people at that time I became radicalised: another world seemed possible! I gave up trying to become a lawyer and sold Red Mole-weekly left-wing newspaper published by the International Marxist Group in the early 1970s, the editor was Tariq Ali.

After university I worked as a teacher in a small town in Northern Italy and in 1974 I came to visit friends in Stoke Newington for a weekend. I stayed, got a job and made my life here. Back then I lived in some dreadful slum flats in Hawksley Road and on Stoke Newington Common.

Jay Estates, the Hawksley Road landlord, invented a devious plan to deny tenants the protection of the Rent Acts by renaming their properties “bed and breakfast” and so every week a man would bring my breakfast: usually just a variety pack of Kellogg’s cereals but sometimes a packet of toast.

I’ve lived in Dynevor Road since 1983. I spent most of my working life as a mental health social worker for Islington Council and retired 5 years ago.

Why were you interested in photography? Why did you want to document political protest, police, and strikes?

I grew up carefully studying a boxful of my mother’s old family photos. I was fascinated to see what I could learn about my relatives just by looking at photographs of them…and stories emerged. I wanted to take my own photos to add to the collection so mum gave me a camera when I was 10, a British-made Coronet Viscount.

I started taking photos of friends, family, outings and holidays – but when I came to Stoke Newington I heard rumours about socially-engaged documentary photography. I began to get an idea of what this looked like from Camerawork magazine, produced by the Halfmoon Photography Workshop in Bethnal Green.

I decided to make a photographic record of life around me here in Hackney, I wanted to tell the story of a working class neighbourhood blighted by poverty, unemployment, racism and awful housing and how local people responded to this onslaught with resilience. I took my camera everywhere and photographed anything that caught my eye: derelict houses, urban decay, uncollected rubbish mountains on the Common in the winter of discontent, people busy being themselves, community festivities, protests, the Astra turning into a Turkish mosque, the first signs of gentrification on Church Street.

I more or less stopped taking documentary photos after the mid-80s. Thatcher and the defeat of the miners’ strike numbed me. I photographed my children as they grew up instead. In 2008 I uploaded some old photos to the Flickr website, I was surprised by the response, it encouraged me to start photographing Hackney again and I’m still at it.

You’ve captured the funeral of Michael Ferreira, what’s the reason for so many people attended this funeral?

Michael Ferreira was a young black man who bled to death in Stoke Newington police station after he’d been stabbed nearby in a fight with two white teenagers. Hundreds of people from Hackney’s different communities came together on a wet Saturday morning in January 1979 to show their grief and anger in front of the police station – as they did again just a few weeks ago when Rashan Charles died after a violent encounter with local police.

You have a lot of pictures taken in Sandringham Road. What was happening on this road? The photo with four men must have a story.

The local Afro-Caribbean community called Sandringham Road “the Front Line”. At one end was the West Indian café and barber and at the other end was the Lord Stanley pub and derelict shops. It was where black youths rubbed up against the local police and it could get very rowdy. The 1981 Dalston riot started there.

My partner lived round the corner in Colvestone Crescent so I often walked along Sandringham Road and it felt pretty ordinary most of the time: groups of young black men being young men, outworkers making their sewing machines screech, loud voices and thumping reggae from open windows and, if you wanted to, you could buy Jamaican weed. It was rumoured that officers from Stoke Newington police station controlled the marijuana trade on Sandringham Road. I can’t tell you what I think is going on in the photo with the four men, some of them may still be around!

How does Stoke Newington/Hackney look compared to when you started to take pictures? What was the community like?

In the 1970s Hackney was a solidly working class area made up of lots of different communities: Jews, Afro-Caribbeans, Irish, Cypriots, Asians amongst others. Manufacturing industries had virtually disappeared; there were local jobs in clothing sweatshops, retail or the Council/NHS but unemployment was high and deprivation indicators put Hackney at the bottom of the pile. Hackney looked terrible too: derelict Victorian houses on every street, boarded up shops, piles of rubbish, burnt-out cars, deserted factories and empty workshops.

The physical environment looks better now, there’s less visible urban decay and there are fewer tower blocks. Stoke Newington is still a hodgepodge of working class communities. What’s new is the recent arrival of white middle class newcomers and the social cleansing of the Woodberry Down Estate. What hasn’t changed is Hackney’s high level of poverty and social deprivation.

How would you describe Church Street when you compare it to the present?

Is Stoke Newington living its best time? What is your prediction for the future?

Stoke Newington’s golden age is yet to come. I don’t know what the future holds but I hope that we don’t have to wait too long before the wealth of this country is shared out more fairly.