People in Hackney are being encouraged to vote for their favourite new building or public space as part of the Hackney Design Awards.

The panel of judges has whittled down the shortlist to 32 schemes and the Council is encouraging borough residents to vote in the People’s Choice Award. The award which has been running since 2010 puts the power in the hands of local communities to vote for their favourite amongst the shortlisted applications.

This year, to celebrate the work undertaken to support young people growing up in Hackney, the Council has launched a dedicated Young People’s Choice Award category. This will champion the new developments that have enhanced the life of young people up to the age of 18, as well as buildings nominated by young people within the borough. We encourage those under the age of 18 in the borough to vote for their favourite schemes in this category.

The panel has taken design, functionality, sustainability, inclusivity and heritage into account to choose the best of an impressive list of nominations. The 32 shortlisted entries will be assessed by a panel of architects later this month, who will decide on overall Design Award winners.

The 32 shortlisted entries for the People’s Choice Awards are:

The 9 shortlisted entries for the Young People’s Choice Awards are:

Cllr Guy Nicholson, Cabinet Member for Planning, Business, Investment and Culture: “The standard of entries to this year’s Hackney Design Awards demonstrates the high quality of architecture and design of new buildings and public spaces found across the Borough. We’re proud to use the Design Awards as an opportunity to both celebrate and recognise the very best of architecture and design and the positive effect this has on our lives.

The Hackney Design Awards were launched 16 years ago and this year includes extensions, restorations, schools and even a floating church. So do cast your vote and make sure your favourite building gets the recognition it deserves.”

2018’s winners included the Blackstone Building, comprising three stacked apartments with a lime, sand and ash stucco facade; the Amazon headquarters in Building 1 Principle Place, designed as a 21st Century warehouse, and De Beauvoir Block, a sensitive and sustainable restoration of an early 20th Century industrial building. A number of previous winners have gone on to be shortlisted for the RIBA Stirling Prize. 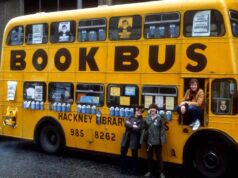 Hackney in the 1980s: 12,000 photographs found in The Rio’s basement have been brought back to life