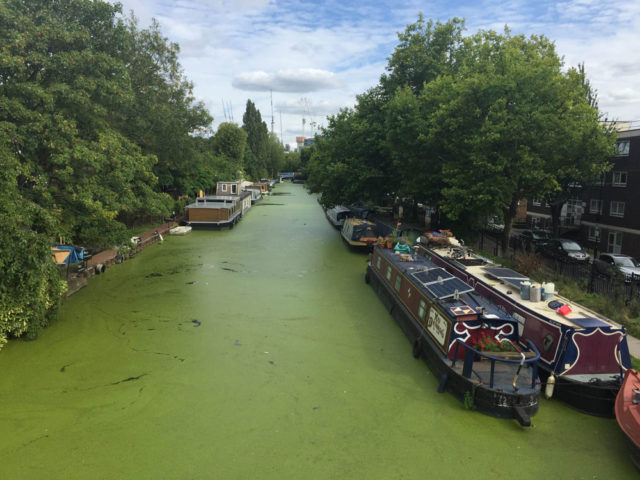 With London’s house prices and rents constantly on the rise, many more people are looking for alternative ways to live in the capital. Mersa Auda visited the close-knit community of floating homes on local canals to find out what boat life really is like. 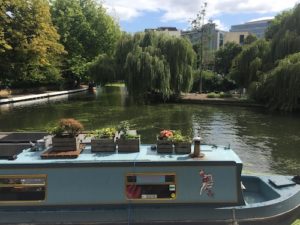 Canal boats have existed for centuries, but the idea of canal homes has never been quite as popular. To get a clearer idea of the lifestyle, we spoke to freelancer Linus; young couple Lowri and David; and family man Damian, who lives with his wife and nine-year-old son Morgan. In spite of daily challenges, it seems that the benefits far outweigh the difficulties – you just need to be up for the adventure.

Linus Sams
“I was born in London and I also grew up here. I was living abroad for ten years and when I came back I found it had changed dramatically: new buildings everywhere, house prices gone up, higher living costs, more people. I had to live in London because all my family and friends are here, so my sister had this idea. It was very straight forward, we bought the boat on the weekend and I moved in on the Monday. This is probably be the only way that I could fit back into London life.
“I’ve only been doing this for a few months but there’s been quite a few challenges, like breaking down in the middle of the canal! Then there’s the fact that you’ve got to always keep the water tank full. I don’t think there are enough free water points where you can fill up. Luckily I’ve got a car, but if you don’t have that you’ve got to go miles up the road to get it. And unfortunately, just when you get used to an area you have to move and start all over again every fortnight.
“You find your way around the challenges though. It was quite stressful at the beginning but I’m starting to enjoy it now. You meet some really nice people and you actually interact with others, which is rare in London. People in the city are usually doing their own thing, not really wanting to talk. There doesn’t seem to be so much human interaction anymore so for me, after being away so long, it’s good to have this community, otherwise I think it would be very lonely.
“I would recommend boat life but it depends on the person and their lifestyle. I’m a freelance stage technician and an artist so for me it works well, but if you didn’t have enough time to be on the boat, it’d be tricky. I’ve always led a slightly alternative life and this fits with my personality.
“I’m seeing things differently from this perspective. I love to create, and this is actually bringing out a lot of stuff for me as an artist, stuff that I didn’t use so much when I was living in a room. In a house I felt stifled, claustrophobic, but here I feel the inspiration coming back. Obviously it doesn’t happen overnight, but I feel it’s starting to happen again.”

Lowri: “I’ve lived quite alternatively in the past and when I came to London [from Swansea], David was living in a flat, but we were really interested in a simpler lifestyle. We met a guy who was living on a boat and David helped him to renovate, so he learnt a lot about boat life. We just thought, let’s give it a go! Obviously the money factor comes into it as well, but it wasn’t the main thing. For me, coming to London and seeing concrete everywhere was quite overwhelming, but this made the move a lot easier.
“You learn a lot here. You’ve only got a small space so you realise that you don’t need most of the stuff you have. We spend a lot more quality time together because we’re not just sitting down watching TV, and I’ve become a lot more creative now. In the next couple of years we’d like to have children and I don’t know how comfortable I’d feel having a newborn on the boat, so our life here will probably be temporary for that reason. Otherwise I’d happily do it permanently!
“Lots of people just follow the crowd and buy a house. This lifestyle is not for everyone, but I think you’ve got to try it to love it. When I go to my mother’s for a night or two I think it’s nice to have the space, and we definitely miss the sofa! But I’m ready to come back every time.”
David: “We don’t really miss anything. What we think we miss was just stuff that we were in the habit of doing. The nicest thing here is that the people are great. I used to live in a flat for two years and I didn’t know my neighbour; here everyone waves, everyone says hello. It would be nice to have a community hub [to discuss common issues], a place where boaters could go and have a chat, and everyone would give their opinion, find new ways, especially now that it’s getting more popular”
Lowri: “With the mooring rules [requiring a boat to move every 14 days], I think it takes a boater to understand the practical problems. It’s not really realistic for us to move around while fixing the boat, for instance. They are lenient with engine problems, but maybe they could be more considerate of people who are renovating.
“As house prices are going up, most people can’t afford to buy one. I think we can learn from other countries that are more ahead when it comes to alternative lifestyles, a lot of people are actually interested in something different.”

Damian: “Living on a boat is about the only way you can have a bit of freedom in London without having to pay somebody else’s mortgage or owe hundreds of thousands of pounds and be a slave to the bank. We’ve been doing it for six years. It was originally meant to be a temporary thing for us, but it’s hard to beat this.
“It’s a totally different experience from when you have a house because you have got to build everything yourself. You’ve got to be ingenious, creative, flexible and determined, or else you won’t last very long living on the water. It does get easier with time. You get a better network and you know what the hurdles are. You get to meet lots of people and we all share knowledge. Every day is a school day. People living in houses don’t have any shared resources, whereas if you’re living on the river you have to be part of the community to survive.
“There are a hell of a lot of challenges, especially surrounding the strict enforcement of the 14-day rule. The mooring rules are run by a body called Canal River Trust who are the most uncharitable charity in the history of charities. They spend a lot of time and resources threatening and intimidating boaters.”
Morgan: “Then there’s the canoeists who always make the boaters move so they can have more room, when they’ve already got a big area. They buy longer paddles which take up all the space, and then they say they can’t row!”
Damian: “There are conflicts over resources as we’ve only got a finite amount of waterways. There could be more dialogue. There’s plenty of space for everybody but it seems to be congregating around certain stretches because there’s a lot of commercial interest.
“When I travel for work and I’ve got instant hot water and all the amenities of a modern lifestyle in a hotel, I’m reminded that having an uninterrupted power supply is a luxury we take for granted. On a boat you learn to live without some things, and you also learn to appreciate what a luxurious life we have in this part of the world.
“Boat life is pretty family friendly, too. Morgan has grown up on the water and we’ve got quite a community of ‘river rats’- the junior pirates! This is a different side of London where there’s a strong sense of community.”
Morgan: “And if we don’t like our neighbours, we can always move! ”
Damian: “They tend to move first though!”