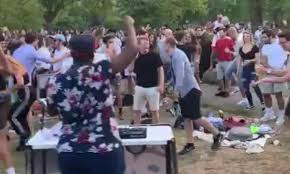 Alcohol is now temporarily banned in London Fields Park following weeks of unacceptably high levels of litter, public urination/defecation and disturbance to local people, which is significantly impacting on the local community and results in people feeling excluded from the park.

Following a successful injunction application, the ban will be in place from Saturday 4 July for a temporary period pending a review hearing in court on 9 July, and will be enforced by the police and Council enforcement officers.

The Council will then engage further with local people and businesses on the issues and consider longer-term options to ensure the park is safe and remains an inclusive space for all park users.

A significant number of complaints from local residents in nearby streets and estates have been received by the Council – detailing the weekly disruption to their lives, with loud music, drunken behaviour, public urination, littering and public defecation making them feel unwelcome in the park and disrupting them at home. Examples of these complaints are included below.

Some recent weekends have seen thousands of people in the park, with DJs setting up sound systems; people urinating against trees in the park, in people’s gardens and outside their front doors; defecation in the park’s woodland; and dancing, loud music and noise continuing late into the night.

101 of the 193 fines were issued to people who do not live in the borough, including 10 issued to people with SW postcodes, 9 with SE postcodes and others from Ilford, Bow, Poplar, Archway, and as far afield as Chelmsford, Bishop’s Stortford, Bexley and St Albans.

Young people have also told the Council’s Young Future’s Commission that the way some people behave in London Fields makes them feel unsafe in the park and concerned about the potential for spread of infection among BAME communities, who are more at risk from coronavirus.

While intended as a last resort, the injunction is aimed at limiting the antisocial behaviour caused by drinking and large-scale music events. It will prohibit people in London Fields from: consuming alcohol; damaging wildlife; possessing, consuming or selling nitrous oxide, laughing gas or CO2; playing loud amplified music; lighting fires or barbecues; driving vehicles or using generators in the park; and leaving litter.

The injunction will give the police the power of arrest for breaches of these conditions.

The Council has already put extensive measures in place to manage issues at London Fields: installing 25 large commercial waste bins at the park, opening toilets with additional cleaning, implementing additional summer waste collections earlier than usual, issuing nearly 200 fines for urinating and littering in May and June and printing dozens of banners reminding people of the guidance.

There are concerns that, as lockdown measures continue and pubs and restaurants continue to be impacted by social distancing restrictions, the issues may get even worse over the summer.

In addition to the injunction, the Council is set to recruit an additional 12 enforcement officers to support parks staff to keep London Fields and other parts of the Borough safe and clean over the summer months.

In the meantime, additional security guards are working with the Council to help manage the issues in London Fields.

The measures the Council is taking to manage behaviour at London Fields are coming at a cost of approximately £150,000, at a time when it is under extreme financial pressure from the coronavirus pandemic.