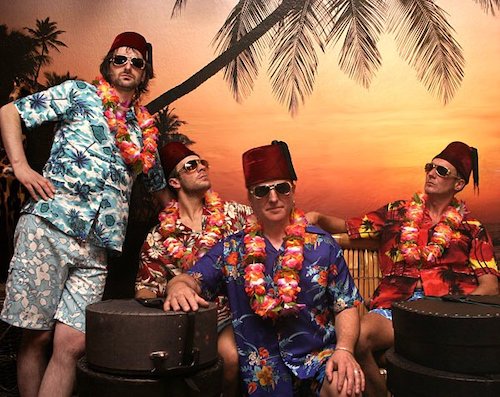 We first met at our father’s funeral: we are all half-brothers to different mothers. Jesus, our father and 1956 All Mexico Surfing Champion, travelled widely with his guitar in search of fame and fortune.

In a nutshell, we discovered we shared a love for our father’s style of guitar music, named Surf-Noir by aficionados, and immediately realised we needed to form a band to keep the music alive. Within months we were playing a residency in Nice and met popstar Jake Shillingford of My Life Story, who suggested a cover of the Blur single ‘Girls and Boys’, our version of which became single of the week in NME. Soon afterwards we became residents of Hackney and the rest is hysteria.

Our sound is instrumental surf-guitar music, based on the sounds of California in the 50s. We choose material from Surf Classics, Classical tunes, popular classics and recent hits.

The fez is another tribute to Jesus C Escovedo, our father, who chose the fez as the style of the louche and cool American lounge scene ie Elks and Mooses. It is a comfortable and practical stage headwear as it protects our two, rather tall guitarists’ heads when we have low stage height. www.bikinibeach.co.uk