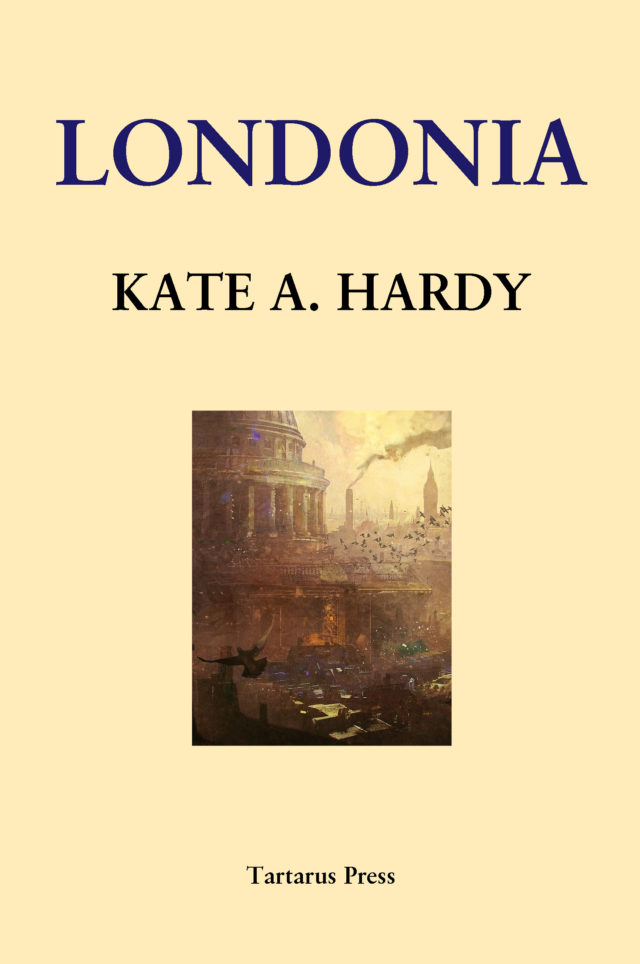 Kate A. Hardy, author of a riveting new book Londonia, to be published 13 March, has set the heart of her book in Hackney. The female protagonist is called Hoxton.  Set in post-apocalyptic London in 2072, this dystopian tale – unusually offering hope (dyst-hopian) – shows a society in technological descent.

Published by ‘World Fantasy Award’ winners Tartarus Press, the immersive, comedic tale – recounted by feisty protagonist, Hoxton, unfolds to the backdrop of an apocalyptic event of 2038, referred to as the “Final Curtain”. Widely held to have been caused by a global internet crash, the Final Curtain plunged the world into a technological descent, which combined with the devastating effects of climate change has transmuted the formerly high-tech cityscapes of London into a visceral urban jungle, reminiscent of a Dickens/Mad Max melange.

Kate A. Hardy says: “As in real life we head towards impending climate breakdown, the ‘Final Curtain’ and the disordered post-internet world described in Londonia may be nearer than we think. Yet as we follow Hoxton’s search to recover her past through unruly dystopian badlands dogged by villains and gangsters, my aim has been to present Londonia as a dyst-hopian tale: there may be strife, hunger and plague but this harshness is placated by times of convivial community spirit, humanity and humour.”

The book also shares hopeful messages for the future about how we can live more simply and less wastefully – recycling and reusing, growing food and foraging; less immersed in screens, and more connected to ourselves, each other and nature.

Kate A. Hardy (not to be confused with fellow novelist Kate Hardy) is a phenomenal emergent writing talent, and artist, who has created a powerfully seductive fantasy world in Londonia, with its own time-altered language. A Londoner now living in France, Kate’s previous books include acclaimed childrens’ story Alfi Beasti, don’t eat that! and her Going out in the Midday Sun trilogy.

Londonia begins with Hoxton stumbling upon the disused St Leonard’s Church in Shoreditch, located within the outlying ‘Londonia’ area of the city formerly called London. Having lost her memory, the 30-something daughter of an African super model and a French wine trader knows nothing of her sophisticated past or how she came to be in Londonia. Taking up residence in the church with her horse Kafka, Hoxton befriends colourful local characters, including Jake the Prophet and Burt the Swagger, and embarks on a new work path as a ‘finder’ – one who sources and trades goods. An important ‘finder request’ calls her to the closeted vicinity of the Cincture, the “hyper-central state” of the city to visit the grandiose Madame Caruso. Unlike its feral hinterland Londonia, life has remained largely unchanged in the Cincture since the “Curtain”, the well-to-do inhabitants continuing their lavish, speed-fashion lifestyles in denial of the impoverished Dickensian quarter that surrounds them.

Having passed rigorous checks at the Cincture’s guarded inner city walls, Hoxton meets a mirror-dame (fortune teller), who tells her she has a son who was born in the Cincture. Duly commissioned by Madame Caruso to find a series of fashionable retro items, starting with an Ikea cabinet circa 2020, Hoxton uses her meetings with Caruso to trace her past, her son and the top Cincture surgeon responsible for wiping out her memory. The search lures her into a sinister web of intrigue as she encounters the many obstacles blocking her quest to find her son…

A raucous satire on our consumer society, the gap between haves and have-nots and the vacuous, fickle nature of fashion, Londonia is a rollicking romp of a ride, which also offers timely signposts for how we can live more lightly on our beleaguered planet.