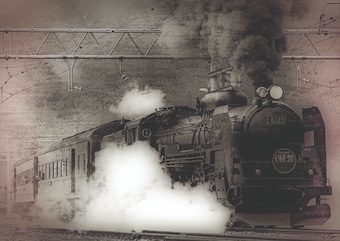 The murder of Thomas Briggs by the young German, Franz Muller has been well documented. Briggs was sixty-nine years old and held a senior position with a firm of London city bankers. On Saturday 9th July 1864 he caught the 9.45pm train from Fenchurch Street to Hackney, travelling in a 1st class carriage. But when the train arrived about 10pm, his compartment was found to be covered in blood. Twenty minutes later the driver of an engine travelling in the opposite direction found the severely injured man lying between the lines. Briggs was examined by two surgeons who agreed he had received about six fierce blows to the head. With no hope of recovery, Briggs was taken to his home where he died the same evening.

The next day the family confirmed that the victim’s hat and gold watch and chain were missing, although they were certain another hat that was found in the compartment did not belong to the victim. So the motive for the killing appeared to be robbery.

All murders are tragic for the families of the victim and the assailant and this one was no different. In this instance though, there were to be a number of factors that made it a particular cause celebre. It was the first known murder of a passenger travelling on a railway train in Britain. And the fact that it was such a violent murder of a prominent businessman travelling 1st class caused outrage amongst members of the public and put great deal of pressure on the Metropolitan Police Commissioner, Sir Richard Mayne. He assigned a brilliant young detective to the investigation Detective Inspector Richard Tanner.

Descriptions of the missing items were published in newspapers and a breakthrough came when a city jeweller, the oddly named John Death, described a young foreign man who had traded in a similar gold watch chain.

“When Muller’s ship arrived he was positively identified and arrested.”

A further appeal led to a cabbie named Matthews identifying a young German – Franz Muller, as having given his daughter an empty jewellery box and when shown the hat found in the carriage, he immediately recognised it, explaining that he had himself purchased the hat for Muller. Matthews was able to provide the police a photograph of Muller and an address for him in Bow. When shown the box, the jeweller confirmed it as one of his and he recognised the man in the photo.

When Inspector Tanner went to the address in Bow, he obtained more damning evidence from the owners. However, Muller had left a few days earlier, five days after the murder, and had set sail for New York. Police lost no time in obtaining an arrest warrant and later the same day Detective Inspector Tanner and another officer, together with the two principle civilian witnesses, boarded a train bound for Liverpool Docks. There they embarked on a modern liner that was larger and faster than the ship taken by Muller. They reached New York a full three weeks ahead of the suspect.

When Muller’s ship arrived he was positively identified and arrested. A search of his possessions found the missing watch and a hat which, although it had been cut down, was believed to be the one that had belonged to Briggs. With all the thrill of the chase across the Atlantic, the public in Britain and America had become enthralled with the case. Yet there was much anti-British feeling and sympathy for Muller expressed in America during the extradition proceedings. And when the party arrived back in England a large and unruly crowd gathered at Euston station to greet them. With assistance from the railway police, Muller was taken to Bow Street Police Station and charged with the murder of Thomas Briggs.

Frantic efforts were made by the German Legal Protection Society to convert the sentence to life imprisonment. King Wilhelm of Prussia sent a telegram to Queen Victoria urging her to intervene and delay the execution. Great pressure was put on the Home Secretary to spare Muller but he resisted and the 14th November was the date set for the execution. Muller had protested his innocence throughout.

Shortly before 8am on the appointed day, he was led out into the courtyard, then guided to the gallows that had been erected outside the prison.
As the executioner placed the noose around his neck, a minister asked again, “Are you innocent or guilty?” Moments before the lever was pulled Muller reportedly said in German “Yes, I did it.”

Over 50,000 people gathered to watch the execution. Appalling scenes of drunkenness, fighting and robbery were widespread. Countless people were injured by the unruly mob. Loud cheering accompanied Muller on his walk to the gallows and when the unfortunate man dropped, the crowd shouted in unison, “Hats Off.” The execution scenes caused great public debate over the morality of public hangings and led to Franz Muller becoming the last person to be hanged in public in Britain.

The case had also alarmed the travelling public and the railway companies. As a direct result, the communication cord safety device was introduced in passenger carriages. There is one other aspect that might be considered in 1864, how many murder investigations had there been where a photograph formed an important part of the evidence; was this perhaps one of the earliest occasions?

At his trial, Muller was barred by law from giving evidence in his own defence (as his wife would have been had he had one). The process to change that began the following year although it was not finally brought in until 1889. As a point of interest, Muller had no right of appeal either that was not introduced until 1907.

The murder of Thomas Briggs by Franz Muller was an unusual one in a number of different ways. It brought about many changes, both in public attitude as well as the law. It was a pivotal case in British legal and social history.