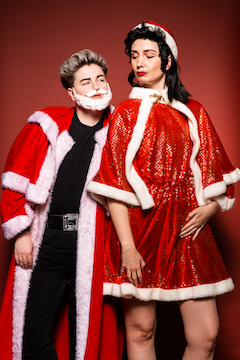 The Yard Theatre is delighted to announce the return of “London drag kings extraordinaire” Pecsmas comes early this year at The Yard featuring a cabaret performance by Pecs Drag Kings as well as a special guest performer every night. The run will end with a late-night party on Friday 20 December, following the success of their Pecs Party in April. Pecs Drag Kings were supported by The Yard in its Live Drafts festival of early stage work last year, before being commissioned for a full run of SEX SEX MEN MEN in the spring. They have performed and run work- shops across theatres and venues nationally including at Soho Theatre, Tate, Latitude Festival, Roundhouse, the Royal Academy and The Glory.