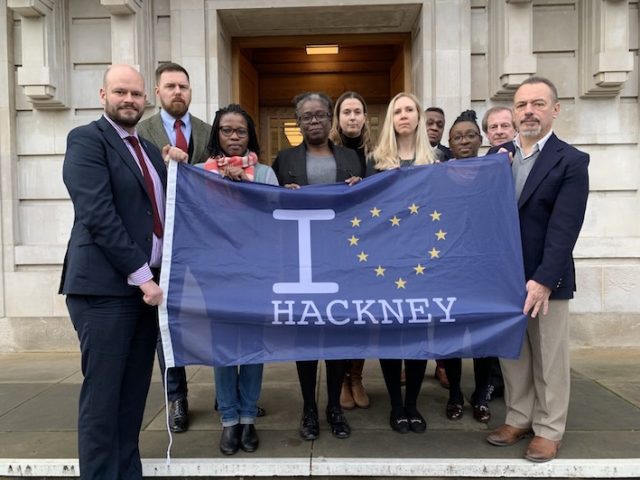 As the UK prepares to leave the European Union later today, the Mayor of Hackney, Philip Glanville, writes an open letter to the borough’s EU citizens.

“We voted to stay, but today we sadly have to leave.

Despite nearly eight in 10 people in Hackney voting to remain in the European Union in 2016, the UK will formally leave later today and – at least for LGBT History Month – the EU flag will come down from Hackney Town Hall.

But you will always remain part of the best of our borough. You are our neighbours, nurses and teachers. Our friends and colleagues. You are part of what makes London the best city in the world. You bring creativity, energy and diversity to this unique corner of the capital. Hackney loves you.

I know how passionately people in Hackney feel about that spirit of togetherness, openness and tolerance. So when we leave this evening, I know that it changes nothing in how welcome and valued all 41,500 of you are in our borough.

And we’ll continue to support you – whether pressing the Government to ensure its EU Settlement Scheme doesn’t become another mismanaged Windrush scandal, lobbying for a fair and open immigration system or simply mitigating the worst effects of Brexit on our local economy and public services

Over two years ago I launched our #HackneyLovesYou campaign to make it clear that you continue to be welcome here and that we value the positive things you bring to our borough. Since then, we passed a comprehensive motion in support of our EU citizens last year, calling on the government to rule out no-deal Brexit and for a people’s vote on the final deal.

While the General Election decided the issue to leave today, that doesn’t mean the divisions in our country have healed and we all have a role to play in ensuring that they start to, and that we remain an open and tolerant society.

I’ve always been a passionate pro-European, and joined many of you on the marches in central London, against the government playing games with your future as part of their negotiating tactics. And over the last year, I’ve been inundated with stories about the amazing contribution of EU citizens to Hackney.

I wrote to all EU nationals on the electoral register last year, reminding you of their rights and inviting anyone concerned about their status to receive support and advice at the Town Hall. I met families who had worked for the Council and Homerton Hospital ─ keeping our communities safe and healthy since you had been here.

It’s vital that we continue to recognise your huge contribution to Hackney. Our borough will stay a shining beacon of diversity – whatever your background or nationality.

While today fills me with sadness and uncertainty still lies ahead, that message will always remain.”