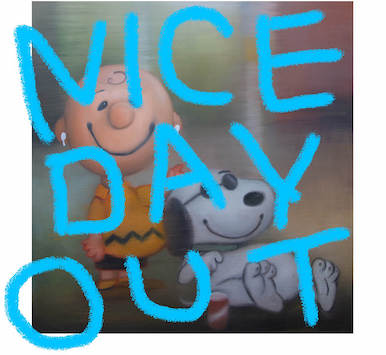 British contemporary artist Timothy Gatenby presents his solo exhibition “Nice Day Out” at Hackney’s Waluso Gallery. The artist creates nostalgic, often dystopian, scenes in oils often featuring our childhood television heroes. His work places emphasis on the colours of distinctly blurred compositions as a reference to his refusal to wear glasses as a child.

This exhibition consists of works Gatenby produced over the last few years as well as many created under lockdown.

Cartoons are used as vessels to represent how the innocence of youth has been corrupted by darker sides of life and ‘adulthood’. Instead of the purity characters like Bart once inhabited over- indulgence of drugs, alcohol and fast food has left them washed up. The over-weight characters are semi inspired by Elvis Presley – addicted to burgers and chips they are bloated versions of themselves. There is a dystopian unhappiness in their transformed selves.

In the football paintings characters are combined to channel youthful feelings of carefreeness and playing football with your mates down the park. The iconic designs of retro Manchester united shirts fused with comedy legends Bevis and Butthead immediately transports you to the 90s in a with a strong feeling of nostalgia.