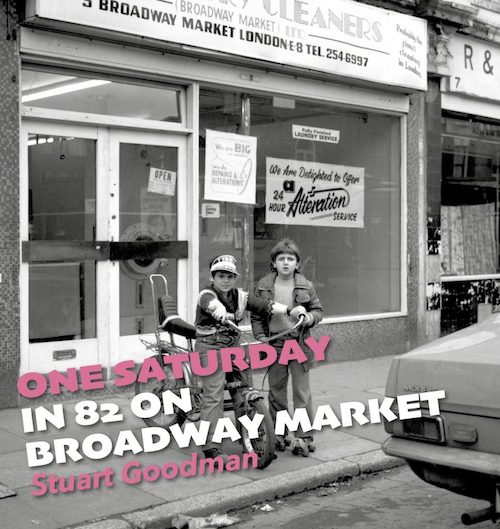 An East London native, Stuart Goodman was brought up on a Hackney council estate and after, unsuccessfully, training as a junior schoolteacher, he became an established Fleet Street photographer. Goodman was both a photographer and a desk man working for agencies and national titles.

He worked for titles as diverse as the Swansea Evening Post, The Guardian, The Daily Mail and the Independent as a photographer and as a desk man on the Daily Star, Evening News and Evening Standard.

In the past he was a resident of Broadway Market in Hackney and when the GLC wanted to demolish the street, Goodman was instrumental in setting up the Broadway Market Action Group which successfully campaigned and saved the area from the bulldozers.

At this time he produced an archive of work, which was published last month by Own It as a book titled: One Saturday in 82 on Broadway Market.

Collated and shot by Stuart Goodman, One Saturday in 82 on Broadway Market captures a day in the lives of shoppers and shop owners on this East London market in Hackney. Stuart’s black and white photography candidly pictures Broadway Market in the depth of its degeneration with the emergence of large supermarkets in the 1970s and 1980s that led to the market being threatened with demolition.

Goodman got the first copies back on the day of his cancer diagnosis. He died on 1st of April aged seventy-three of the coronavirus.

Stuart’s photography offers a snapshot of a street which has since become unrecognisable. From old women with their grocery-filled trollies and the mundanity of laundrette dealings to the littered road and smashed up car windows, the book candidly records a simple walk down the market. In one picture a graffiti defiantly announces “Broadway Market is not a sinking ship – it’s a submarine”.

“I miss the place. Not the squalor, the outside loo, the wasps’ nest, the cold… but the people, the community and somehow, the optimism. There wasn’t a gastro pub in sight and who had ever encountered a buffalo burger?” – Stuart Goodman

The book launch was already postponed, but his family plan to have this and a celebration of his life, when the situation permits.