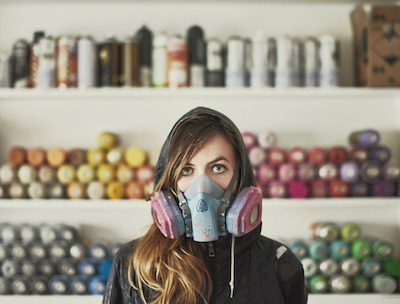 Zabou is a French street artist and painter based in East London. Since 2012, she has been travelling the world to spread her artistic message of love, fun and rebellion.

Working mostly with both spray paint, Zabou produces giant black and white portraits with colourful backgrounds, creating both striking and thought-provoking artworks. Her works are exhibited at the prestigious galleries such as Saatchi Gallery in London.

Tell us about yourself. How did you first get into painting?

I moved to London from France for my studies and fell in love with this city. I’ve been drawing and painting since little but had never tried spray painting. I was so impressed by the local graffiti and street art scene here that it pushed me to do my first steps into spraying. I started by making stencils and over the years as my style evolved, I switched to free hand painting. I’m now a full-time artist, traveling around the globe to create murals and do what I love most.

Can you tell us about your latest work David Bowie portrait in Hackney?

I painted the mural back in December on Ada Street, next to Broadway Market. I wanted to create a tribute portrait of David Bowie as he is such an inspiring figure, hero and music genius to so many Londoners and beyond. The artwork depicts Bowie with his famous Ziggy Stardust make-up on a red and blue background.

Capturing faces is not the easiest discipline. Which of the portraits you painted challenged you the most?

Portraits are indeed a real challenge. The more I paint the more I understand the volumes, highlights and shadows, the eyes and all the other key elements that make a face look alive.

My biggest challenge to date may be a recent commission in Beeston (Nott) that features the portraits of Paul Smith, Richard Beckinsale and Edwin Starr. The full mural is 35m large so the scale of the faces was gigantic.

When it comes to starting a mural, what does the process involve? Logistically in terms of the scale, but also mentally and emotionally? How do you decide what to paint?

First I need to come up with a design, using photos and dimensions of the space. Sometimes I take my inspiration from the history of the city, the social and environmental context, or an inspiring person who lived there. Sometimes it’s a random idea!

Once the subject is picked, it can take a lot of research to seek images and information. I then draw my sketch using a graphic tablet directly onto the photo of the space, so it can be adapted to its architecture (door, windows, pipe etc.).

When I’m on site, I start by drawing the outlines and then slowly fill in the background and the characters. Painting in the street can be a real challenge as it is physically exhausting and weather dependant. Something always goes wrong!

What about this neighbourhood/city? How has it changed since you’ve moved here?

I’ve lived in East London for the last seven years, and so much has changed since I first moved here. The biggest change has been the face of many streets or even whole areas where old buildings are taken down in order to build new accommodation; small shops are being replaced with big chains etc. People with lower income and often creatives have to move further and further out of the city centre. A lot of street art and graffiti is being destroyed in the process, and the public space become sadly blank and sanitised.

What inspires you to keep creating?

To see the impact and positive effects of the murals on people’s daily life. To inspire. To brighten the world one wall at a time.

Do you have any plans for any future murals, if so can you give us some details?

There will be more murals around East London, but it can be a slow process as I’m often traveling abroad. My next murals will be in France, Italy, Cyprus and Haiti.

Your favourite places in Hackney?

My favourite place to wander is definitely Regent’s Canal and Victoria Park. I love to grab a beer at The Dove in Broadway Market and watch a movie at the Hackney Picturehouse. 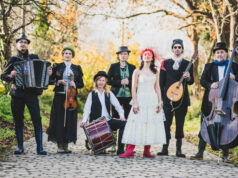