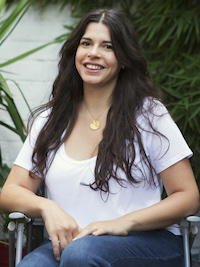 WRITER AND DIRECTOR STELLA CORRADI TELLS ALL ABOUT HER AWARD-WINNING SHORT FILM LITTLE SOLDIER, WHICH SHE WROTE AND DIRECTED

“Originally from Italy, I came to London when I was 5 years old and lived and studied in Islington and Stoke Newington. I went to Stoke Newington school and have always remained in the area. I graduated from Queen Mary University of London with a Masters in Film and then worked in participatory film projects with young people and refugees before starting as a director’s assistant in feature films working under the mentorship of Sally Potter (Ginger & Rosa, The Party) and Justin Kurzel (Macbeth, Assassin’s Creed). I embarked on making my own short film Little Soldier through the London Calling scheme from Film London in 2015. After a year on the international festival circuit, winning best female director at London Short Film Festival and various special mentions around the world, Little Soldier reached a wider audience when it was released as a Vimeo Staff Pick this year.

“Little Soldier is loosely based on my own childhood and inspired by people I know but the events and characters are fictional. I was interested in telling a story from a young girl’s perspective. I wanted to show the intelligence, resilience and strength that children can have. Woman and family issues are universal, I think there is something about a mother and daughter relationship that many people can relate to.

“I have recently become a mother and the love between us is so powerful.

I’ve also realised that parents are just human. We make mistakes but we do our best in relation to our own limitations. The relationships within a family are interdependent: a parent needs their child’s love as much as the child needs the parent’s.

“In many families, the child has to take on the role of the parent. This is the dynamic that interested me and pushed me to write and make Little Soldier.

“The story was always clear in my mind but when it came to filming there are always the realities of creating a scene which works in your mind and does not always work on camera or within the story. There were a few scenes which had to be reworked in the editing room. For example, the powder paint bomb scene: this was originally set in real life but it didn’t work very well so we cut it with scenes of Anya playing and imagining the scene in her mind instead.”