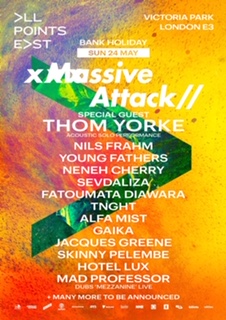 All Points East Festival returns to east London’s Victoria Park in 2020 to once again showcase why it’s become a key staple of the capital’s music calendar.

Confirmed to be headlining the London festival so far are Tame Impala, Kraftwerk 3D and Massive Attack.

Australian psychedelic rockers Tame Impala are set to headline All Points East on Saturday 23rd May in what will be a UK exclusive.

Their performance will follow the release of their first album in five years, and will be the first time fans will be able to hear the new songs live in the UK.

The next day will see Bristolian legends Massive Attack top a bill that includes the likes of Neneh Cherry, Mad Professor and Nils Frahm.

Meanwhile on Friday 29th May, Kraftwerk will celebrate 50 years since their debut release with another UK exclusive as they present their legendary live show from the main East Stage combining digital surround sound with breathtaking 3-D animations and robotics.

And on Saturday 30th May, The Kooks will take to Victoria Park where they’ll be joined by The Wombats, Tom Walker, Jake Bugg and more. The indie-rockers will be delving deep into their back catalogue to treat fans to hits such as ‘Naive’ and ‘She Moves In Her Own Way’.

Since bursting onto the scene in 2018, All Points East has curated a wide ranging lineup that pulls from a host of popular genres, including rock and indie through to dance and hip-hop.

Held on the lush grassland of the city’s historic Victoria Park, All Points East resides in the heart of London’s famous East end, with a wide range of restaurants, pubs, and cultural hotspots covering the surrounding areas, just perfect for that pre or post-festival pint.