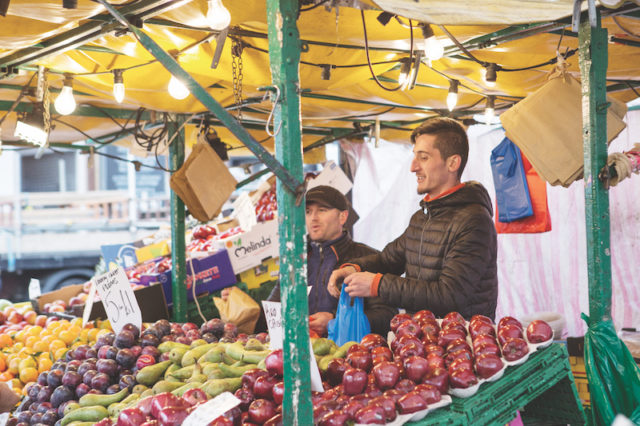 At the heart of Dalston is the Ridley Road Market. It began life in the 1880s with around twenty stalls; today it boasts over 150 stalls o ering a diverse range of quality goods at very competitive prices.

Visitors to Ridley Road Market are greeted with a warm and pleasant atmosphere, the energetic sound of reggae music and the natural blend of cultures. Apart from serving fruit and vegetables to generations of families, the market also offers a wide range of household goods.

There are stallholders whose ancestors were here at the start, trading as early as the 1880s. Larry Julian, 63, has been chair of the Ridley Road Traders’ Association for 21 years and began working here at the age of twelve, helping out with his family’s stall after school and on Saturdays.

Larry says they lived in a house just around the corner from the stall and that he grew up here. Many of family, including his brother, spent years selling fruit and vegetables. His mother branched out into toiletries twenty years ago and he now runs that stall.

“When I was a child the market was very vibrant, it was very busy,” he says. “It has always been a good market. One of the best market in London. Unfortunately, like everything else, competition gets stronger, the market is not busy as used to be.

“People change the way they shop. People shop online, people shop in big supermarkets. And it makes difference now. It has changed. It is deteriorated which is a shame. But that is life.”

London is home to migrants from over 200 countries. Strolling down the Ridley Road Market, you can find food made by dozens of them. Larry says the profile of people he served changed roughly every ten years.

The 140-year tradition will end with his generation

“Obviously going back to the fifties it was a very Jewish market. In the late fifties, sixties and seventies mainly West Indian, late 70s and into the 80s we had Turkish and Greek people.

“In the nineties Turkish and Greek people opened their own businesses and that was sort of coming away from markets shopping side of it. West Indian people have always been a big influence in this market.”

Despite his family’s extensive connections to trade, Larry believes the 140-year tradition will end with his generation as his children are doing different jobs and do not want to run the market stall.

“When I was a kid just automatically you would work with your parents. That’s the way life was,” adding that falling pro ts meant it was not an attractive career for his children.

“It is not for them. You are losing a lot of the young generation. Local councils do not help out. The local council is basically working on too much regulations instead of working on common sense. That becomes a problem.”

One problem he highlights is the legal working age of 16, meaning children do not grow up with the trade like they did a generation or two ago.
“A lot of traders here in their 40s they have been here since they are 12. So eventually markets are going to die because you haven’t got enough young generation coming through.”

And when asked if he still enjoys the job, he strikes a sombre note.

“No. The market has changed,” he says.

“And probably I am old and tired of it. People are a lot harder to serve now. I’m old-school now. I have had a good time. I am probably the last of my generation…”

If you inspect every stall on the market you will inevitably find some great deals. £2.99 for fresh aloe vera; £1 for a kilogram of blueberries, sold at four times the price in the supermarket. In fact, a simple assessment of your weekly shop at a big retailer is enough to bring you to this market.

My grandfather was here all his life

Larry’s 58-year-old cousin Susan Julian works on a stall selling eggs that was started by her grandparents and handed down through her uncle to her.

“I help my uncle here because it is my grandparents’ business. My grandfather was here all his life. His father before him. He only started the egg business out 50 years ago. Before that he was a fruiterer. My family has been in the market through all of its existence.”

She continues: “Today as a family we have a few stalls. Older families are leaving now. New people are coming in. We used to have predominantly West Indian customers along with English. Now we have such a big diverse range of customers: Turkish, Chinese, East European, South American customers and still we have West Indian and English.

“My children went to college and university. They moved on now. Younger ones are not doing it now. There are a few, but not many. It is hard work. It used be hard work for good money. Today it is still hard work but not very much money.”

The youth at work

One of the younger traders is Bradley Don, 30, who has come to this market from Eltham, the south of the Thames, for one and half year selling curtains, blinds and bedding. His father worked here 15 years ago and the business is one part of a family trade that extends across London.

What does he think of the work?

“I do not particularly like this market. This markets customers hard work. But generally speaking, as a market trader it’s fun. To do this job is a fun job. Different markets have different politics. Some markets make it very difficult for you to work. It depends on which market you
go to.

“In the summer it’s the best job. But in the winter it is rubbish. I will not continue to work here if it does not get any better. This year has been terrible, it is just not enough money. Customers here do not want to spend too much money.”

Carole Rank, 62, lives in Essex but has sold bed clothes, sheets, towels and blankets on the stall for 42 years. The stall passed to them from her husband’s family and Carole can do a sale in five different languages.

“It is my husband business. I haven’t been working here full time. I worked for Marks & Spencer during the week. I worked there for 20 years. I was in the head office. I help my husband in the weekends,” she says.

“My husband’s family has been here since 1948. His grandparents were here before the war. They were here in 1920s.

“My children would not work here. They went to university. I don’t think It is good career move. We are probably retiring end of this year.”

“The only language I had problem is Russian because of the alphabet. I could not even say it, I could not even write it. Most Russian people can understand Polish so I can serve in Polish. I have got very, very nice customers. But some of them are old and dying. I have got very nice customers from the Caribbean but they are going back to the Caribbean. A lot of people know me here. I am trying to help people. It is enjoyable.

From white goods to burgers

One of the longest-standing trades in the market is Osman Mukavim who started selling white goods here in 1985. He later moved into the burger trade.

Those first years of his time on Ridley Road Market were far livelier, he says, adding that many would visit from far and wide because parking was not a problem.

“But once credit cards and shopping centres came about, market business began to fall. The new generation are not interested in the market.” 

Ridley Road Market traders could get new weatherproof stalls, free WiFi and card machines in a £1.5million makeover thanks to funding from Sadiq Khan.

Traders at Ridley Road Market could receive new stalls, free wifi and handheld payment machines as part of a joint funding package from Hackney Council and the Mayor of London to help them compete in a changing high street.

The upgrades would be part of a raft of improvements at the market which would also provide greener spaces for traders and shoppers, using £770,000 from the Mayor of London’s Good Growth Fund, matched by the Council.