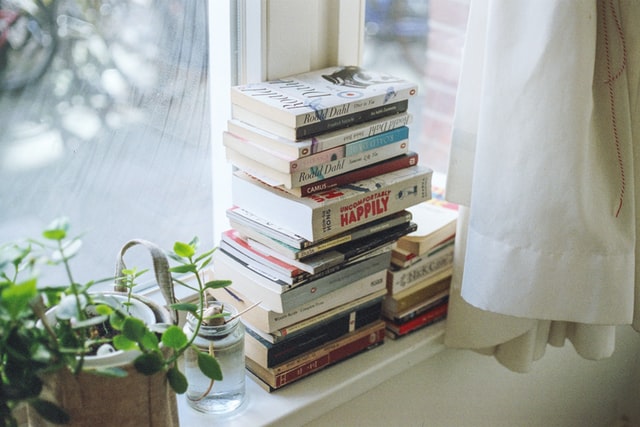 Hackney’s inspired many writers to put pen to paper. Here are some of the best books which are about Hackney.

A CONCISE CHINISE – ENGLISH DICTIONARY FOR LOVERS, XIAOLU GUO, 2007
A Concise Chinese-English Dictionary for Lovers which is shortlisted for the Orange Prize for Fiction, a novel of language and love that tells one young Chinese woman’s story of her journey to the West—and her attempts to understand the language, and the man, she adores. Zhuang—or “Z,” to tongue-tied foreigners—has come to London to study English, but finds herself adrift, trapped in a cycle of cultural gaffes and grammatical mishaps. Then she meets an Englishman – a 44-year-old bisexual vegetarian who lives in Hackney. The language barrier, as it turns out, is the least of their problems.With sparkling wit, Xiaolu Guo has created an utterly original novel about identity and the cultural divide.

The plot centres on Polly Slade who works for Hackney Council, an ordinary woman with a highly unusual past, whose world is thrown into turmoil when the two men in her life show up at her front door in the middle of the night: Jack, a general in the United States Army with whom she had a short-lived affair as a teenager and Peter, an obsessive stalker who has been terrifying her for the past two years.

From the Booker prize-winning author of Girl, Woman, Other.

Barrington Jedidiah Walker is seventy-four and leads a double life. Born and bred in Antigua, he’s lived in Hackney since the sixties. A flamboyant, wise-cracking local character with a dapper taste in retro suits and a fondness for quoting Shakespeare, Barrington is a husband, father and grandfather – but he is also secretly homosexual, lovers with his great childhood friend, Morris.

His deeply religious and disappointed wife, Carmel, thinks he sleeps with other women. When their marriage goes into meltdown, Barrington wants to divorce Carmel and live with Morris, but after a lifetime of fear and deception, will he manage to break away?

Alexander Baron was from Jewish-Hackney community that has largely disappeared now, served in WWII which formed the basis for his novel From The City, From The Plough and in his time was a bestselling author selling millions, critically lauded but now partly forgotten and out-of-print.
The Lowlife is set in Dalston, Hackney, Stoke Newington and the racetracks of Walthamstow. It’s fascinating to read about the area fifty seven years ago through the eyes of it’s London Jewish protagonist, Harryboy Boas. Harryboy Boas is a gambling man who loves the dogs. He lives in the quietly respectable streets of Hackney and keeps himself to himself. Until, that is, a new family moves into his building. Step by step, the ordered – if faintly disreputable and financially rackety – life he has led begins to unravel. He is drawn into a murky underworld where violence and revenge are the inevitable payback for those who can’t come up with the money. A brilliant portrayal of a way of life in its last days in the 1960s.

Dickens meets Mad Max in Kate A. Hardy’s gripping dystopian novel set in post-apocalyptic London, 2072. Kate A. Hardy, author of a riveting new book Londonia, has set the heart of her book in Hackney. The female protagonist is called Hoxton.  Set in post-apocalyptic London in 2072, this dystopian tale – unusually offering hope – shows a society in technological descent.

A literary murder mystery set in the heart of Hackney, where a terminally ill writer Samson Young stumbles across both a funeral-crashing young woman, and the plot that will kill her.
Void of ideas and on the verge of terminal decline, Samson’s dash to a decaying, degenerate London has brought him through the doors of the Black Cross pub and into a murder story just waiting to be narrated.
At its centre is the mesmeric, doomed Nicola Six, destined to be murdered on her 35th birthday. Around her: the disreputable men who might yet turn out to be her killer. All Samson has to do is to write Nicola’s story as it happens, and savour in this one last gift that life has granted him.

Hackney Child, a true story depicting the harrowing life of Hope Daniels. At the age of nine, Hope Daniels walked into Stoke Newington Police Station with her little brothers and asked to be taken into care. Home life was intolerable: both of Hope’s parents were alcoholics and her mum was a prostitute. The year was 1983. As London emerged into a new era of wealth and opportunity, the Daniels children lived in desperate poverty, neglected and barely nourished.
The book is ghost written by Morag Livingstone for Hope Daniels (with the pseudonym of Jenny Molloy).

Now a major film directed by Idris Elba, Yardie by Victor Headley shines a light on the brutal underworld of 90s London gang culture. Yardie explores Hackney’s Jamaican community in the early 90s through the eyes of anti-hero and drug smuggler, D. He arrives in London with a kilo of cocaine and sets out to rise to the top of his profession. A must-read 20 years ago, Yardie can be hard to find these days, but there’s cheap copies online.

Hackney, That Rose-Red Empire is Iain Sinclair’s personal record of his north-east London home in which he has lived for forty years. It is a documentary fiction, seeking to capture the spirit of place, before Hackney succumbs to mendacious green papers, eco boasts, sponsored public art and the Olympic Park gnawing at its edges. It is a message in a bottle, chucked into the flood of the future.

ACQUIRED FOR DEVELOPMENT BY…: A HACKNEY ANTHOLOGY, 2012

David Rodinsky lived above a synagogue in the heart of the old Jewish East End of London, and sometime in the late 1960s he disappeared. His room, a chaos of writings, annotated books and maps, gramophone records and clothes, was left undisturbed for 11 years. Rodinsky’s world captured the imagination of a young artist, Rachel Lichtenstein, whose grandparents had escaped Poland in the 30s, and over a period of years she began to document the bizarre collection of artifacts that were found in his room, and make installations using images from his enigmatic bequest. She became obsessed with this mysterious man: Who was he? Where did he come from? Where did he go? Now Lichtenstein and Iain Sinclair have written an extraordinary book that weaves together Lichenstein’s quest for Rodinsky. Part mystery story, part memoir, part travelogue, Rodinsky’s Room is a testament to a world that has all but vanished and the celebration of the life of a unique man.

The farms and nursery gardens of these two old villages gave way to terraces for City workers in the 19th century. As with other suburbs the railway era permitted the affluent to leave, abandoning the area to poorer workers. The author records the problems related to the creation of Victoria Park and the significant local presence of protestant dissenting movements. Famous residents include Samuel Rogers, John Howard, General Booth and George Gilbert Scott.

Every Sunday a small army of amateur footballers descend on Hackney Marshes. Known as the ‘spiritual home of amateur football’, the marshes consist of some 80 pitches where more than 50 matches are played each week from September until April. Photographer Chris Baker, an amateur footballer himself, has spent the past three seasons documenting this Sunday ritual.

The Second World War had a dramatic impact on Stoke Newington, Shoreditch and Hackney. This fascinating book tells the story of how six years of war affected the daily lives and living conditions of the people of the area.

East London in the 70s was raw and vivid: bombed-out houses, kids playing in the streets, factories abuzz with workers. These images take us on a journey through workshops, street markets and council homes to capture a time and place before technology and gentrification changed local lives forever.

Stephen Gill has used his surroundings as the inspiration for this beautiful and evocative series. Hackney Flowers has evolved from his series and book Hackney Wick. This times Gill has collected flowers, seeds, berries and objects from Hackney, East London, that were then pressed in his studio and re-photographed alongside his own photographs and found ephemera, thus building up multi-layered images extracted from the area. Some of the base photographs were also buried in Hackney Wick, allowing the subsequent decay to imprint upon the images, stressing this collaboration with place. A parallel series also runs within this finely produced volume, showing members of the public in Hackney with floral details on their person. This is a warm, poetic and visually exciting book containing images that leave an overwhelming sense of colour, emotion and rhythm extracted from a single borough of London.

David George’s photographs of Hackney by night reveal urban landscapes of stillness but also strange pastoral beauty. Here is the London that we miss when we sleep. The images are accompanied by a short story by Karen Falconer that takes the reader on a parallel journey into the night of the narrator’s past and a painful memory that is unresolved…