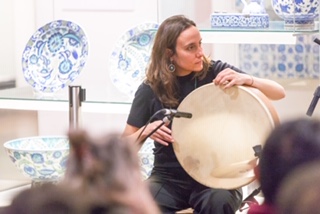 I was born in Caracas, Venezuela. My dad was English who went on to live and work as industrial designer in Venezuela in the 60s. My mum was already working as a primary school teacher and living there with her Italian family who emigrated from Naples in 1948. They met there and got married. I left the country in October 1999, when I was 22. My father had already died when I was 19. I always wanted to travel and explore new ventures. My mum still works and lives in Venezuela, despite the harsh conditions in the country.

I worked as waitress, nanny, bartender and cleaner at different points during my first 3 years in the UK. At the same time I was studying English and later on, I took lessons in music composition and percussion at Morley College. I did my BA in Ethnomusicology at SOAS from 2003 to 2006.

Since then, I have been organising live music events, percussion workshops and playing with many bands and artists. I have also worked in primary schools as a music teacher and done some work for theatre and storytelling.

I always loved Middle Eastern music, from the times my father would play his records at home to when we visited our Lebanese friends in Venezuela. Also the Gurdjieff/De Hartman music was very influential as I was growing up listening and playing that music on the piano. My father also played a Syrian doumbek (darbuka) with some friends at home as they tried to play Gurdjieff music with Middle eastern instruments.

Last time I went Venezuela was 2012. I have been scared of going back there again to be honest. And the authorities don’t make easy for you either. To get a new passport it’s a nightmare (it can take up to 1 or 2 years to get it) and sometimes (as I read in an article and social media) they have taken passport off Venezuelans who are coming with their European passport and do not let them out again of the country.

I do not know how people carry on living in those conditions.

I play Balkan/Gypsy, Turkish and Middle Eastern percussion with various bands/artists and at various projects. I have done percussion workshops since 2009, first at SOAS, then at various community centres and now I mainly teach from home. My courses run for 7 weeks normally, one day a week for 1 hour and a half. I teach for beginners and intermediate students. From time to time I also organise workshops on a weekend, like the one I just did, which was mainly to introduce people to Middle Eastern Ensemble music. www.elizabethnott.co.uk