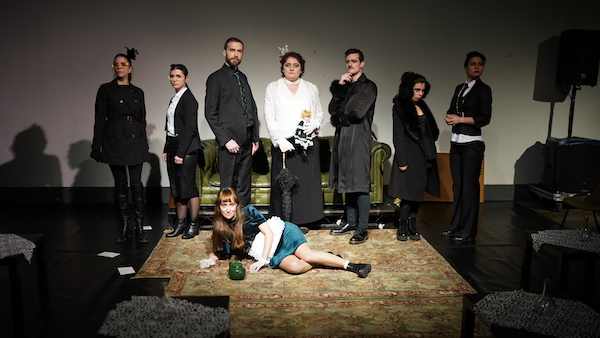 Pan Productions will welcome in the new year with Wilde’s quintessentially English masterpiece The Importance of Being Earnest at the Tower Theatre. Their first play in English, it is created with a team of immigrant actors and creatives, who, like the characters in the play, are constantly asked where they are from, when all they want to explain is who they are.

‘Where do you come from?’ is often asked in society where the real question we should be asking is ‘Who are you?’

We usually know where we are from, our culture, our upbringing and when we move, we adapt to where we live, the language we speak… We change and we are changed. Yet the question of ‘Who am I?’ is ever present.

This is a story; a group of actors and creatives who spoke their first words in different languages but made the UK their home, and English, the language of their daily toil and nightly poetry.

This is also the story of Algernon who knows where he comes from but doesn’t seem to be clear about who he is; and Earnest who thinks he knows who he is but not where he is from – a story from the wonderful Oscar Wilde, an immigrant himself.

Directed by award-winning director Aylin Bozok (Children of War, Arcola Theatre and British Museum; Cholera Street, Arcola Theatre), this is the story of Algernon who knows where he comes from but is unsure about who he is; and Earnest who thinks he knows who he is but not where he is from. As performative identity runs up against people’s stereotypical assumptions, The Importance of Being Earnest resonates with the unique identity crisis of the migrant experience.

The production dwells on the unspoken rules that English society enforces and confronts the struggle to fit in when you have a different accent, a different upbringing and different cultural expectations. It makes the audience contemplate identity and belonging to create a new vision of a classic to celebrate diversity.

Director Aylin Bozok said: “I was born in Switzerland and grew up there and in Turkey, but I never felt I belonged to either. I can safely say that I feel I am a Londoner. And now tackling this quintessentially English play I find I could relate to it because despite cultural and linguistical differences, humans are humans, whether in their truth or their lies.”

Tickets are available from £12 at https://www.towertheatre.org.uk/