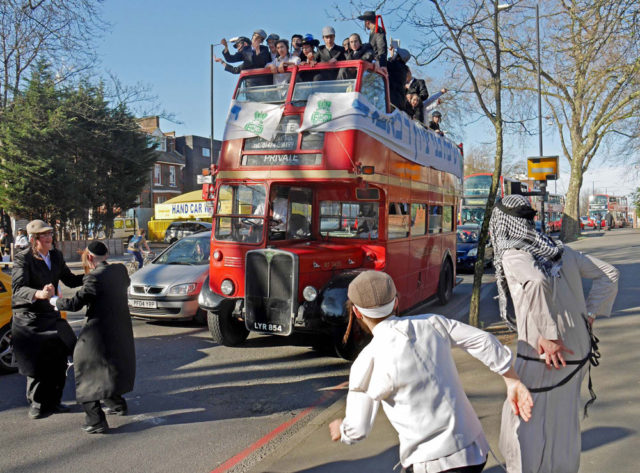 Stamford Hill is home to one of Europe’s biggest Hasidic communities.

Hackney’s diversity is an aspect of the borough that makes its residents proud. Nearly nine out of ten people here say that it is a place where people from different backgrounds get on well together. In each issue Hackney Magazine speaks to representatives of different communities. In this issue: the Jewish community largely concentrated around Stamford Hill.

The roots of Stamford Hill’s Haredi Jews, known for being an intertwined and private community, extends to 18th century eastern Europe. The Haredi are also sometimes called ultra-Orthodox Jews and the Hebrew term itself means “one who trembles before God”.

Their emergence is credited to a rejection of modernistic reform movements in Judaism beginning in 19th century Germany. Many Haredi Jews saw themselves as the final defence of orthodoxy and resisted the change of religious education and practices.

The community was nearly wiped out during the Holocaust, but migration to Israel, Britain and North America has helped rejuvenate them. There are around 1.5 million Haredi Jews in the world today and they have one of the highest birth rates among any Jewish community in the world, meaning the population is rising rapidly.

Herschel Gluck is a British Rabbi with a busy portfolio of responsibilities: he is president of the neighbourhood watch group Shomrim (the Hebrew word means “guardians”) in Stamford Hill; chairman of the Arab-Jewish Forum and chairman and founder of the Muslim-Jewish Forum.

I met Gluck at his home In Stamford Hill. The family business is a bakery and he treated me like he was hosting a relative, bringing his broad smile and a wide array of dry fruit, cinnamon and marmalade cakes to the table.

The first Haredi arrived in Britain in the 19th century from Lithuania. When did the community first settle in Stamford Hill?
“There are about 40,000 Jews in the wider Stamford Hill area, including Haringey,” he said.

“Many of the Jews in Stamford Hill came here as refugees fleeing the Nazis in the ’30’s and after the horrors of Holocaust in the 40s and 50s. They came from Germany, Hungary, Czechoslovakia, Austria, Belgium, Holland and many European countries. In the 50’s and 60’s Jews came from Morocco, India, Burma and Aden [in modern-day Yemen]. Many have family in other countries and they try to participate in joyous occasions like weddings. 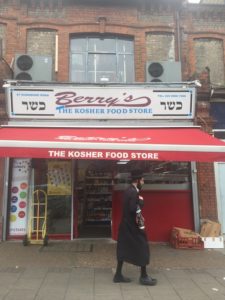 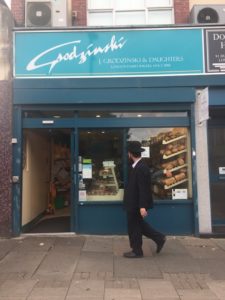 Despite being a fairly small neighbourhood, Stamford Hill is crammed with kosher supermarkets, bakeries, fishmongers and butchers and clothing stores that sell only the traditional Haredi line. There are also five community centres, 90 synagogues and 30 Orthodox schools.

The Haredi mainly speak Yiddish. A Haredi man cannot speak to any woman, form eye contact with them or shake their hand unless she is his wife. Unmarried men and women do not make contact with one another and there is a firm gender separation at social events. This is even the case at weddings, which tend to be arranged marriages.

When I ask whether there are any difficulties living in Britain as a Haredi Jew, he replies:

“There is, thank God, a very vibrant and good social and educational infrastructure to facilitate a Chasidic lifestyle here.”

The family is at the centre of the Haredi Jewish lifestyle and special celebrations. Spending time together, particularly through eating meals, is an important part of life

“There are many traditional dishes. Jews have lived for thousands of years around the world and this is reflected in a very eclectic choice of culinary styles.

“Of course they all comply with the Torah Laws and are Kosher.”

The Jewish sabbath – Shabbat – is on a Saturday. It comes with some very strict laws for Haredi Jews that must be prepared for ahead of time. Jews devote themselves to God on this day and pray considerably more. They do not spend money or work. They do not even use electricity – which is why they leave the lights switched on from the night before – or cook, write, watch television or use the telephone.

Because of these rules, the Saturday lunchtime meal of choice tends to be Cholent, a traditional stew made of meat, beans and potatoes.

The rules of Shabbat are enforced more strictly than you think. I was once walking down a residential Stamford Hill street on Saturday morning when a Haredi gentleman rushed up to me in a panic and asked me if he could ask for a favour.

“It’s the fuse box in my house. Could you please come in and flick the switch for me?”

It’s strange, to say the least, when someone you don’t know rushes up to you with that kind of request. I admit I did feel a little nervous as I walked with him to his house, but I relaxed a little when I saw three girls – clearly his children – sitting in the living room.

Then the gentleman told me the fuse box was in the basement.

But my nerves had returned with gusto as we took the steps down into the basement together and I lifted the main fuse switch, restoring electricity to the house. The gentleman thanked me and I left: the Haredi are so devoted to Shabbat laws that they won’t even touch a fuse box.

Another traditional Jewish event is Purim, which is easily one of the most entertaining holidays. It commemorates the saving of the Jewish people from Haman, a royal vizier to the Persian king, who planned to kill all the Jews in the empire. The festival celebrates how the plans by Biblical character Mordecai and his cousin and adopted daughter Esther, who had risen to become Queen of Persia.

Today Purim is a day of feasting and rejoicing, and sees children where colourful costumes and dance to loud music. Lots of wine is drunk, songs are sung and the sound of celebration travels for miles from Stamford Hill. Local residents are given gifts of wine and baked treats, and charitable gifts are given. The Book of Esther is read at synagogue that week.

Hershel tells me that Rosh Hashanah, the Jewish New Year celebration, will begin on 20 September this year and last for two days.

“This is followed about a week later by the Day Of Attonment- Yom Kippur- when all healthy people over the ages of 12 for young ladies and 13 for young men fast for about 25 hours.”

He adds: “The area is safe, thank God, since there are many good and responsible people living in the neighbourhood.  Also Shomrim together with the local Police have contributed substantially to the local stability.”