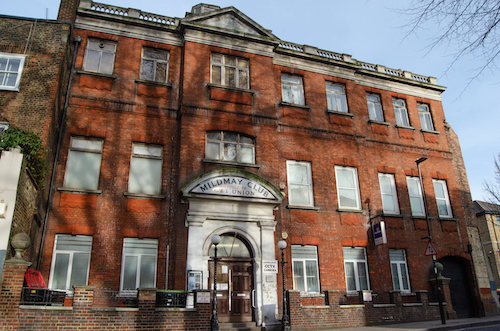 I had visited 130 years old Mildmay Club and talked to the president Fred Riches 2 years ago. As Newington Green area has been changing I wanted to talk to the Mildmay Club president again. The Club members informed me that Fred passed away in 2018 and the Club’s president is now Tom Jones.

Mildmay Club is one of the last of London’s Working Men’s Club. As members were offered millions from building companies they refused the offers and want to keep as a club. Do you still want to keep as a Working Men Club?
There were a number of proposals and a variety of offers but having been around for 130 years there was no appetite for the Club to disappear and the sale options were overwhelmingly rejected in a vote of the membership. We want to continue as an independently owned and operated club for our members (like 1,600 other CIU clubs around the UK) run by us as volunteers. The ‘working men’s’ title by the way is clearly historical and the Club is open to all.

Any demand for change from new generation of the club?
The Club membership has of course changed as the area has changed but the attitude of the members and their commitment to the Club has changed very little, it continues to be run by a volunteer committee and the attitude is often one of if is not broke don’t fix it. If the members want changes to be made then ideas come to the committee and they get discussed and voted on but as it stands the members both old and new like things just the way there are. A few small changes are always inevitable, the introduction of some craft beers in the bar, introducing the ability to take card payments, Wi-Fi in the building and a more active social media presence for example , but the essence of the club is in the familiar and constant, this is the charm of The Mildmay, this is what people want to be a part of when they join.”

The club is criticised by local people that the club is not open to everyone.
The notice on our front door says “We welcome membership enquiries” and the fact that the Club’s membership has more than doubled in the past few years and is now in excess of 500 shows that we are open to everyone, that new members are joining and people are welcome to do so.

The club constantly is hired by famous people and big productions. What’s the latest events or projects that is happened in the Mildmay Club?
It’s not ‘constant’ because members’ use takes priority but given the Mildmay Club is a perfectly preserved authentic space, it is true we have been lucky enough to have many high profile shoots in the Club but we don’t just work with the big studios, we also welcome, and work with photographers for fashion and editorial shoots, small independent film and music labels and when possible local students for photography and film projects.

Do you hire the club for community events?
We are always happy to receive enquiries from anybody who is interested in using the Mildmay Club, and if we can accommodate them around members taking priority then we will. The Club is available for private hire by members and non-members. We run community events on a regular basis, including Snooker and Darts tournaments and Bingo (which is open to both members and non-members) every Friday night throughout the year.”

Do you think The Mildmay Club contribute Newington Green local life?
Absolutely, at the heart of the club is the community. The majority of our members are local to the club and live on or around Newington Green (although this is not a pre requisite to becoming a member). We are a founder member of the recently formed Newington Green Alliance and are keen to be directly involved with local volunteer community projects.