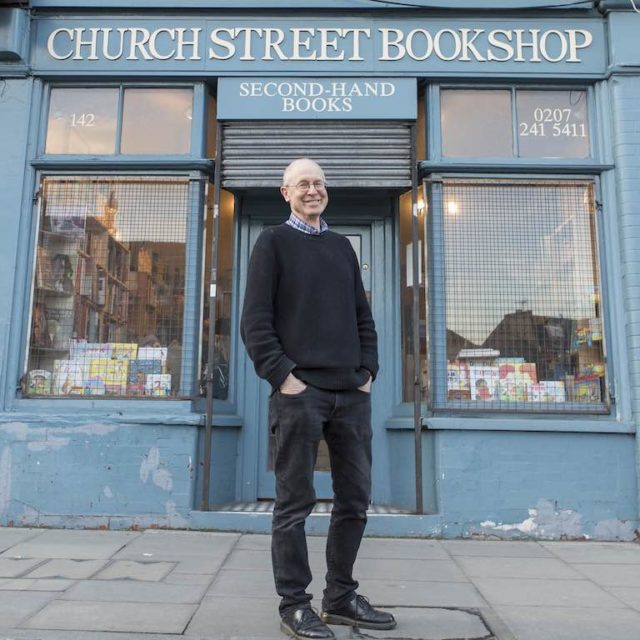 I have sold second-hand books in three different shops on Stoke Newington Church Street since 1980. In the 1970s, my wife and I worked in a bookshop in Charing Cross where I was in the second-hand section until we were made redundant.
There used to be a shed on Woodlea Road, behind the shop on Church Street that is now Borough Wines. It’s a flat now. John was selling 1930s and 1950s antique items there that he had collected from the market.

We were living on that street at the time: my wife spoke to John and we agreed to share the shop. I sold second-hand books and John sold antiques.
I have been in my current shop since 1994, but I don’t think it will last much longer. The landlord wants to change the entire building. If he gets permission from the council, I will have to leave.
There was less competition in the years before the internet. I’ve been able to stay here for so long because Stoke Newington doesn’t have an Underground station, which increases rents.

Most of my sales are in the shop, but I sell some on Amazon too.
We used to rent a home in Finsbury Park in the 1970s, but a friend of mine told me we could move to Stoke Newington and get a mortgage for less than the rent from the local council. We didn’t even need to put down a deposit. I still leave in that house on Woodflea Road with my wife. She doesn’t work in the shop, she looks after our grandchildren.
We used to sell more books in the 1990s. People had more money then. But I think they now spend the money on eating and drinking. They still buy books, but they say the number of unread books in the house has increased.

20th century authors are the bestsellers for me: George Orwell, Graham Greene, Ernest Hemingway and John Steinbeck. We sell a lot of picture books because of the babies and children living in the area. We sell lots to Europeans, Americans and Australians living here. They have a stronger bookshop culture.

My author recommendation is Graham Greene. He’s a journalist who travelled Britain’s colonies in the 1930s and wrote novels. He has some really interesting works based in Haiti, West Africa and Cuba.