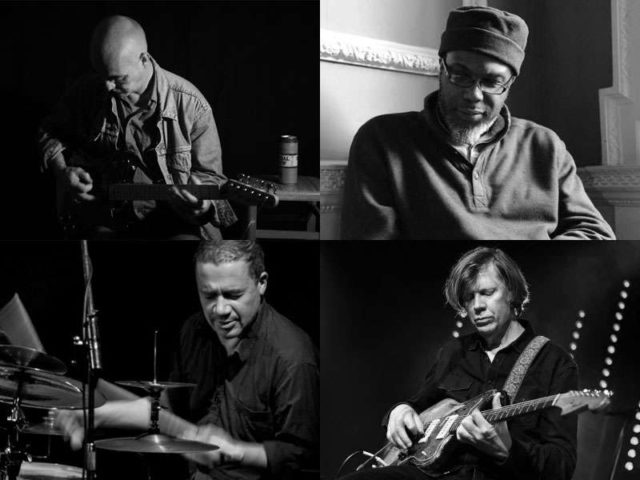 Excited to host the first quartet performance from these four master improvising musicians.

Dave Tucker is originally performed in the late 70’s Manchester Punk scene with Mellatron who released a record in 1978. between 1980-81, performed and recorded the legendary “Slates” with The Fall. Since the mid 80’s, has been resident in London and has performed and recorded with amongst others, Evan Parker, John Stevens, Johnny Dyani, Mick Beck, Phillip Wachsmann, Barre Phillips, Otomo Yoshide. Also a long time menber of Alan Tomlinson Trio, Scatter with Pat Thomas, Phil Minton and Roger Turner as well as being a long time guitarist and conductor with London Improvisers Orchestra. He has written and performed music for film and TV, including BBC and channel 4 which won the rory peck ward.

Pat Thomas studied classical piano from aged 8 and started playing Jazz from the age of 16. He has since gone on to develop an utterly unique style – embracing improvisation, jazz and new music. He has played with Derek Bailey in Company Week (1990/91) and in the trio AND (with Noble) – with Tony Oxley’s Quartet and Celebration Orchestra and in Duo with Lol Coxhill.

Mark has worked with a host of renowned musicians including Derek Bailey, Henry Grimes, Mathew Shipp, Evan Parker, Roswell Rudd, in duo and quartets with Wadada Leo Smith and trios with Charles Gayle with Sirone and William Parker.

In situations using composition Mark works in a number of projects including Christian Marclay’s Everyday for film and live music and John Butcher’s Tarab Cuts – both projects have performed major festivals throughout Europe and Brazil. He has performed works by guitarist John Coxon in Glasgow and Sydney playing with the Scottish and Sydney Symphony Orchestras. With New York’s ICE Ensemble he has performed John Zorn’s The Tempest in London and at Huddersfield New Music Festival.

Mark also works in the groups of Paul Dunmall including Deep Whole Trio with Paul Rogers, and the ensembles of Sarah Gail Brand, including a long-standing duo. He has a lengthy discography including a solo album, has performed internationally and played at major festivals including, Nickelsdorf, Ulrichsburg, Womad and notably at Glastonbury with legendary saxophonist John Tchicai.

Thurston Moore started Sonic Youth in 1980 and has been at the forefront of the alternative rock scene since that particular sobriquet was first used to signify any music that challenged and defied the mainstream standard. With Sonic Youth, Moore turned on an entire generation to the value of experimentation in rock n roll – from its inspiration on a nascent Nirvana, to Sonic Youth’s own Daydream Nation album being chosen by the US Library of Congress for historical preservation in the National Recording Registry in 2006. Thurston records and performs in a cavalcade of disciplines ranging from free improvisation to acoustic composition to black/white metal/noise disruption. He has worked with Yoko Ono, John Zorn, David Toop, Cecil Taylor, Faust, Glenn Branca and many others. His residency at the Louvre in Paris included collaborations with Irmin Schmidt of CAN. Alongside his various activities in the musical world, he is involved with publishing and poetry, and teaches writing at Naropa University, Boulder CO, a school founded by Allen Ginsberg and Anne Waldman in 1974. Thurston also teaches music at The Rhythmic Music Conservatory (Rytmisk Musikkonservatorium) in Copenhagen. Presently he performs and records solo, with various ensembles and in his own band, The Thurston Moore Group.